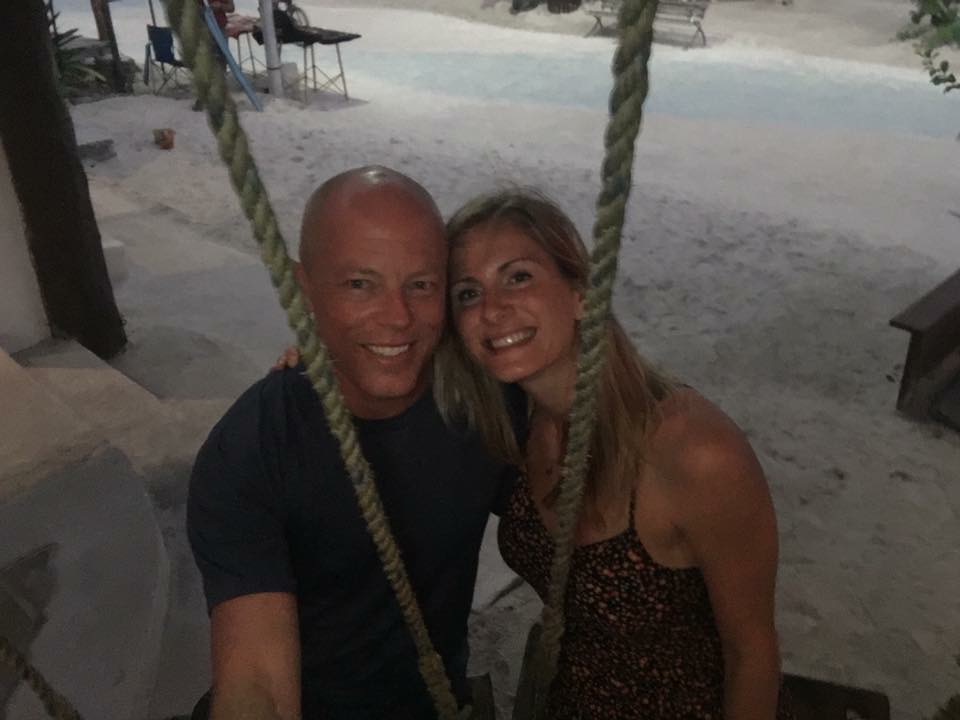 I think the (emotional & political) climate surrounding America has been just a little contentious lately.  So, here I’d like to add some warmth, for whatever it’s worth. 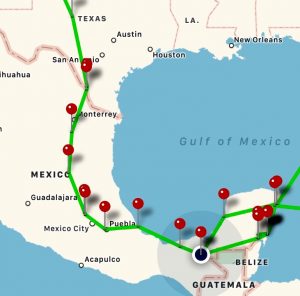 Our route through Mexico 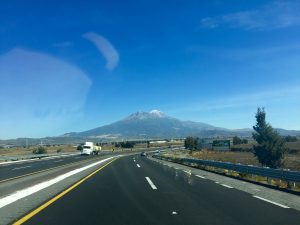 Just a little peep view of the road not far outside Mexico City.

During a contentious political time surrounding the inauguration of Donald Trump, we have been in Mexico traveling in our little Sprinter van we call home.  We  crossed the US/Mexican border on Dec. 31st, 2016 and drove all the way from the US border to the very southern end of Mexico over the last two months.  Being Canadian/American in Mexico I’ve had a insider and outsider view of the contention between Americans over the election and also Americans view of outsiders. By many American accounts we would encounter incredible dangers driving through areas with “safety concerns & warnings”.  We were “warned” of the worst: that we would be beheaded, or at the very least robbed, corrupt cops or the cartels would be out for us, and a whole bunch of scenarios in between. Mainly the story was, “Mexicans are scary, are not to be trusted, the country is full of corruption and everyone is out to get you.

In reality, the last time I was truly nervous was in Texas, waiting to cross the border. Since then we have encountered immense beauty of both the country and the people. We continually feel a presence of deep happiness among the people here…of living and being. Not a happiness that needs to be boasted about, or coated in glitter and shared on facebook, something truly real. 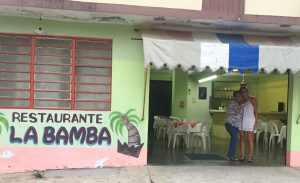 A restaurant owner, Violeta who treated us like family immediately, taught us much about culture, her views of her homeland, giving me a mini-spanish language lesson along the way AND fed us amazingly! If you find yourself in Palenque, find this lady’s restaurant. 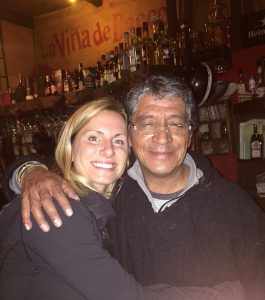 A local man we met and spent and evening with. I can’t write everything about how wonderful he was, but he instantly became a life-long friend. He taught us many things, and humbled us, showing incredible love and generosity to new friends.

After a couple months living in Mexico I wonder why Americans are so worried about Mexico? Is the government and media portrayal of danger really a common reality? In Mexico,  we do try to make safe choices; we avoid driving at night, we don’t go places we don’t know alone etc. Obviously not everything has been perfect, we had to pay a local cop a ~$13 USD “tip” because my seat belt wasn’t on correctly. Not so bad in 2 months.  The hardest moment mentally for us was at BPM (a music festival), where a shooting occurred in January 2017, killing 5 people. We were supposed to be at that event, but we were too tired and ended up not going.  We woke up the next morning to frantic texts and calls from concerned family and friends, and the bewilderment of how something so awful could happen at an event meant for fun. Then again a similar situation occurred at a US music venue a year prior, which we very well could have been at as well. Yes, things happen like this in the US too. Not infrequently either.  Not to say that this event didn’t shake us. Yet, the warmth of the local people is contagious, and we feel that deeper than any overblown media message about Mexico being scary and dangerous. We’re consistently in awe of the GENUINE kindness of the people here.. They go out of their way to be kind often enough to have shatter the fear the American media, and some American “officials” portray. 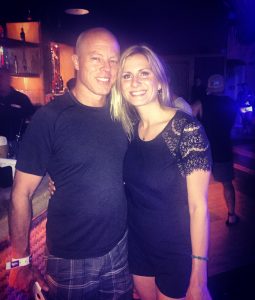 Us at BPM, our favorite week of the year, and sadly the last in Playa Del Carment after the shooting.

Instead of what the media portrays about Mexicans, consider our personal experiences: One day recently, we pulled into a city grocery store, looking to park, a man comes out of his way, from across the lot, and waves us down. We instinctively think he wants something, but instead, he had come to move 2 shopping carts and a garbage can out of our way so we could park easier…with a smile on his face!  This man wasn’t a worker of the store,  just a happy, genuine local Mexican who went out of his way to help.  He smiled waved and went about his way asking nothing of us. 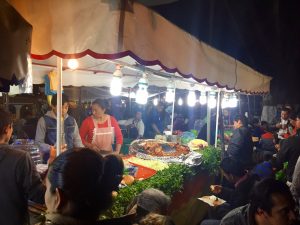 We LOVE the markets for the vibrant colors, textiles, food and swarms of people sharing it all.

Frequently, we pull into gas stations and even with our awful Spanish the attendants always work their hardest to help us with whatever we need (diesel, a bathroom, chocolate, use of American Express), even if it means leaving their station for another. Most of the time, they also ask us where we are from, if we have enjoyed Mexico, how our travel has been. It seems that in reality, not only workers, but the average Mexican citizen, in most cases, tend to go out of their way to help us (and other travelers we’ve met), even with the language barrier that could so easily divide us.  At one gas station a group of  little girls came up to me so excited to say hello, take a picture, play for a few moments together as HUMANS….as their mothers watched them with smiles.  Often people apologize to us they don’t speak better english… in a country that is Spanish speaking!!… Where we are outsiders who barely speak the language of their country – they apologize to us!!! This still amazes us every every single time it happens. These are just a few of the common experiences we’ve had. Everywhere we go, it seems, theres a warm “hello”, “welcome”, “do you need anything”, “lets be friends”…

Maybe I am wrong, maybe our 2+ months of experiences are just luck, and America and the media are right. Then again, maybe it’s somewhere in the middle. I’d like to think we all know a little better than to just believe all the media sensationalism, but even some of the reactions from people we know tell otherwise. Instead, I would like to add some perspective to the other side, the side that shows the warmth and beauty of Mexico and it’s people. Further I’d like to ask you to challenge yourself to take a deeper look — to consider what effects that the media sensationalizes things are having on you, and how the culture of fear has changed your perception and behaviors? The irony is the violence associated with the drug war in Mexico is fueled by American’s thirst for those drugs and the issues going on in our own American neighborhoods.  Often we hear Mexico judged by the towns bordering America, yet the further you drive away from the border (and America) the less you see of the grime and chaos, & the more beauty, warmth and serenity of the Mexican culture you find. 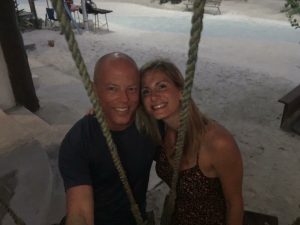 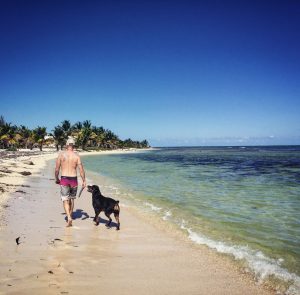 My point in all of this is to just consider that exploration, and experiencing the ‘unknown’,  what’s been labeled as “scary”, “dangerous”, “awful”,  or”lesser” can actually do all our hearts and souls a little good.  Humbling our hearts, showing us the those ‘others’ -from the ‘other’ political party, a different nation, religion, or social class- aren’t so bad. Maybe, just maybe, they are just loving humans too.

The thing to do, it seems to me, is to prepare yourself so you can be a rainbow in somebody else’s cloud. Somebody who may not look like you. May not call God the same name you call God – if they call God at all. I may not dance your dances or speak your language. But be a blessing to somebody. That’s what I think. ~ Maya Angelou

~ With much love, Chantelle.

We would love to be connected with you, if you would too subscribe to our newsletter for occasional updates!